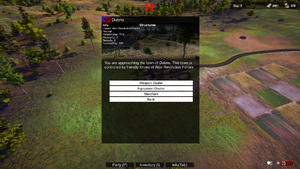 Towns are the backbone of the economy in any country and the fallen state you're fighting for is no exception. In the regular campaign, your goal is to seize ten towns altogether from the opposing factions and secure victory. You can enter and visit towns that are controlled by other factions as long as they are neutral or friendly to you. In all towns, you can recruit new units, visit weapon, armor, general, and gift merchants, and also visit the bar to get tips or accept missions to raise your reputation.

You can seize control of a town from the opposing faction by attacking it with your forces. Each town has a specific defense rating (which affects autocombat where you aren't involved), and a garrison number (the troops you and your companions will face when engaging in the battle personally). Depending on the size of the garrison and the faction you are facing, capturing a town can be incredibly difficult. It is recommended to have a party of at least 30, preferably with troops who have grenades, high-power rifles, and a high nature sight attribute.

On the other hand, a town like Antopil under the Atov Federation often has a garrison of over 90-120 troops, usually sharpshooters and special forces, who have some of the best stats in the game.

Once you seize control of a town, you will be able to tax it. The level of tax depends on the population, and you have to collect it by visiting the town yourself unless you agree to automatic taxing, in which case a 30% commission will be deducted.

Towns have four main attributes which quantifies the happiness of the people and it's prosperity:

These attributes can be increased by constructing buildings, prioritizing one of them as part of your town legislature, or by lowering the population so the needs of the town can be better satisfied. However, the less population you have, the less people will be paying taxes.

As of Version 0.951, the "sweetspot" population between happiness and taxes is about 8000, where approval ratings will hover around 60-65%. Although you can demand higher taxes, below 60% there is a slight chance riots can occur, which damages buildings and causes casualties. However, above 60% there is a slight chance people will donate credits to you or even hire soldiers to volunteer to you.

You can develop towns you capture by ordering new buildings constructed in them. Most towns already have about 20 random buildings already in them and have a maximum of 35 land plots that can be built.